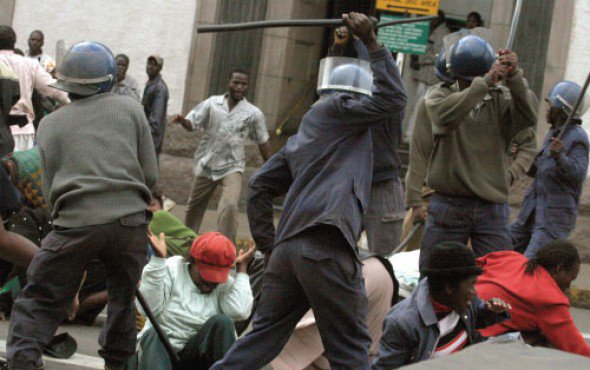 In a recent article in the Zanu PF Sponsored "Herald Newspaper", the following article appears on the 1st September 2021 by the infamous UK Mental Health Nurse, Nick Mangwana - strangely enough shortly after the American Ambassador to Zimbabwe, Brian Nichols, had left his post!

The article below flies in the face of reports by the American Embassy in Harare, Amnesty International, Catholic Church Commissioners, United Nations and significant others. We have added in commentary to the verbatim report in the Herlad [all in italics]

The Herald Article in Full: [In Our Opinion a contrived rant, and a tissue of lies designed to confuse and deny all and any wrong doing by Zanu PF in Zimbabwe - and no doubt relayed to the British Government who seem to beleive this diatribe verbatim!]:

""AHEAD of President Mnangagwa’s visit to the United Kingdom, the country’s detractors disguised as Civil Society Organisations (CSOs) have upped the anti-Government ante as they seek to besmirch the Second Republic through dark operations propaganda. At the centre of the evil machinations are three CSOs, which Government spokesperson Mr Nick Mangwana described as “Zimbabwe axis of evil” namely the Zimbabwe Lawyers for Human Rights (ZLHR), Doctors for Human Rights and Zimbabwe Human Rights NGO.""

""This comes as the so-called human rights organisations have in the past been caught up in embarrassing situations where they tried to use fake abductions to advance the false narrative that there are human rights abuses in the country. Curiously, most of the abductions took place just ahead of crucial global events such as the United Nations General Assembly (UNGA) and other regional meetings. Insiders within CS0s have since revealed that they identify major global events, working with oppositional forces, to stage-manage the abductions to soil the country’s image.""

""To push the anti-Government agenda, some members of the CSOs, specifically Mr Doug Coltart claimed that a military deserter Solomon Chanengeta had been abducted by six men when in fact it is a common procedure. Chanengeta deserted from the Zimbabwe National Army 4 Brigade in Masvingo. He reportedly left the army some three years ago and fled to South Africa without having completed the mandatory three-year probation. He slipped back into the country recently and was domiciled in Karoi. When his superiors established he was back on Zimbabwean soil he was tracked and arrested by the military police in an operation that also involved the Zimbabwe Republic Police.  According to ZNA rules, a person can leave the army after three years in what is known as the probation period, they can also do so after 10 years, they can retire after 20 years or they can leave when they turn 55, unless if there is an extension agreement. Anyone who leaves outside these parameters and without paperwork is considered a deserter and leaving unprocedurally is not taken for granted as the former soldier may be compromised. However, before establishing the facts, a trigger happy Coltart went on to baselessly claim that Chanengeta had been abducted when that was not the case something that Mr Mangwana said comes as little surprise.""