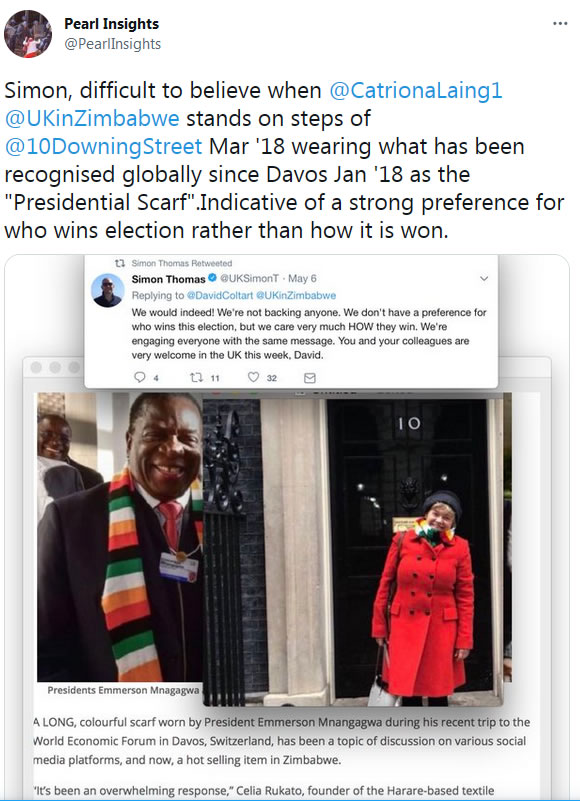 Written by: Croc O’Dile [Biographer to the criminally insane dictators on the World]

The facts below having been referenced and verified is a list of Emmerson Dambudzo Mnangagwa credentials as a politician, soldier, advisor to Robert Mugabe, Military Strategist etc.

Mr Mnangagwa got into power through a coup of his predecessor Robert Mugabe in 2017 and subsequently a highly disputed election in 2018 which he denied the MDCA due process in the courts through manipulating the Zimbabwe Electoral Commission and the judicial system through chief Justice Malaba who he trying to extend his rule through arbitrarily by trying to change the constitution.

This was an attempt to legitimise his rise to power which has continued to fail, and many Zimbabweans are horrified by the Zanu PF rule under his leadership. Extending Chief Justice Malaba’s tenure is a ploy to get the rigging machine ready for the 2023 elections in order for Mr Mnangagwa to stay in office.

This is an indication of his political shrewdness and that of his political faction in Zanu PF known as Lacoste. He is known for viciously attacking his political and personal opponents. Mr Mnangagwa is accused of forcing a love rival Mr Godfrey Majonga from a high rise flat through the window. This left Mr Majonga paralysed and wheelchair bound for life. He is further accused of trying to end the life of his political rival in Kwekwe Mr Chebundo in 2000 who escaped death by a whisker after he escaped youth who had been instructed to torch him to death.

Mr Mnagagwa has been accused of masterminding the killing of his potential political opponents like Rex Nhongo also known as Solomon Mujuru who was his potential rival for ascension to power in the Zanu PF ruling party after Robert Mugabe. It is rumoured that he was the only rival to Mnangagwa who had better connections to the military and was a 5-star general therefore the crocodile had to eliminate him early in the game of the succession bid.

Josiah Tongogara and Herbert Chitepo is rumoured to have been killed by Robert Mugabe with the help of Emmerson Mnangagwa. They are said to have been killed in a road accident, but this was staged as he could potentially have been the leader of Zimbabwe post-independence. This killing relationship between Robert Mugabe and Emmerson Mnangagwa continued shy 2 years of Robert Mugabe’s death. Many other generals and political opponents within and without Zanu PF were to die this way as well which included Edward Chindori Chininga, Susan Tsvangirai, Elliot Dhliwayo, Moven Mahachi, Border Gezi, Chris Ishewokunze, Herbert Nleya, and Elliot Manyika among many.

This was the infamous operation by Zanu PF which more than 30000 ethnic minority were killed through the infamous ‘Gukurahundi’ between 1983 and 1987. These events remain a sore spot in the Zimbabwean history and the Mnangagwa regime continues to refuse to address these issues as they deny any responsibility for the actions done during that time. Mr Mnangagwa was then the minister of state security which was responsible for the 5th brigade which carried out these atrocious acts. This remains unresolved as no commission to investigate this issue was never set up in Zimbabwe.

Although troops of the Zimbabwe Defence Forces have been a major guarantor of the security of the Government of the Democratic Republic of the Congo against regional rivals, its senior officers have enriched themselves from the country's mineral assets under the pretext of arrangements set up to repay Zimbabwe for military services. Now ZDF is establishing new companies and contractual arrangements to defend its economic interests in the longer term should there be a complete withdrawal of ZDF troops. New trade and service agreements were signed between the Democratic Republic of the Congo and Zimbabwe just prior to the announced withdrawal of ZDF troops from the diamond centre of Mbuji Mayi late in August 2002.

ITEM 27: The key strategist for the Zimbabwean branch of the elite network is the Speaker of the Parliament and former National Security Minister, Emmerson Dambudzo Mnangagwa.[Currently President of Zimbabwe] Mr. Mnangagwa has won strong support from senior military and intelligence officers for an aggressive policy in the Democratic Republic of the Congo. His key ally is a Commander of ZDF and Executive Chairman of COSLEG, General Vitalis Musunga Gava Zvinavashe. The General and his family have been involved in diamond trading and supply contracts in the Democratic Republic of the Congo. A long-time ally of President Mugabe, Air Marshal Perence Shiri, has been involved in military procurement and organizing air support for the pro-Kinshasa armed groups fighting in the eastern Democratic Republic of the Congo. He is also part of the inner circle of ZDF diamond traders who have turned Harare into a significant illicit diamond-trading centre.

The run up to the 2003 elections in Zimbabwe was marred with violence, torture, killings, and arbitrary arrests suspected to be masterminded by the ruling Zanu PF and Emmerson Mnangagwa has always been believed to be behind these atrocities.

Before the run-off elections between Robert Mugabe and Morgan Tsvangirai in 2008 there was an ‘operation makavoterapapi’. Implying that people who had voted for Morgan Tsvangirai and not Robert Mugabe had sold out and had to pay. It is said Morgan Tsvangirai won but Emmerson Mnangagwa forced Robert Mugabe to refuse to relinquish power, rather they terrorised citizens by beating, maiming, abductions, torture, rape and in other instances killing them. The Zanu PF establishment then promised enough bullets to cater for everyone who would not comply and vote for Zanu PF. It is this period where people were maimed and had their hands and feet cut off in order to intimidate people to vote Zanu PF. Emmerson Mnangagwa has been singled out as one of the characters that has led killings and violence in Zimbabwe.

After he became president, he has famously been known to threaten violence and harm to people in his speeches the famous ‘shamhu ine munyu’ – ‘wipe with salt’ or ‘varakashi’ – champions of beatings. As the 2023 elections are fast approaching it is important to note that violence will be escalated by the Mnangagwa regime to maintain power. They know without a shadow of doubt that they have no support among the populace.

There has been no progress on the economy since Mnangagwa took to office. The economy has worsened including the deterioration in value of the Zimbabwean rtgs and prices of basic commodities continue to soar and are out of the reach of many Zimbabweans. People are starving, have no access to medical care and have no money for transport to go to school and to work. The healthcare system has degenerated more with some of the hospitals running with no paracetamol. Infant mortality at birth is the order of the day with only 2 in 8 babies surviving each delivery. Infrastructure continues to deteriorate as some hospital wards have no functioning delivery rooms, operation rooms, kitchens and even toilets. The threats of the health system continue to be compounded by HIV, TB and COVID 19 among others.

Recently a picture of a burst  sewage cast iron pipe has made rounds on social media. This pipe is in the middle of homes and children play in this area. The infrastructure continues to deteriorate with the government even failing to sanitise drinking water and produce enough electricity with people at time going for days without water and electricity. In high density area people have their water supplied from boreholes sunk in the community by civic organisations like UNICEF. The failures of Mnangagwa are numerous too tally.

Mr Mnangagwa’s corruption and possible criminal activities have been said to extend beyond the Zimbabwean borders. The Zimbabwean government through Emmerson Mnangagwa was accused of intervening in the DRC conflict to loot diamonds, gold, and other minerals. That is why currently in Zimbabwe conflict in the streets against the Zimbabwean people is fanned while he and his mates in the establishment continue to bleed the nation by smuggling diamonds, gold, and other minerals out of Zimbabwe in clandestine ways. Recently his niece Henrietta Rushwaya was accused of attempting to smuggle 6 kg gold through the Robert Mugabe international airport worth approximately half a million USD. After being caught she submitted that the gold belonged to Mrs Mnangagwa and that she was just a messenger to deliver the gold to its intended destination. What is sad after being caught attempting to smuggle gold out of Zimbabwe she was given the position to head Zimbabwe Miners Federation. How despicable. Tendai Biti recently gave a report that at least 100 million USD worth of minerals are smuggled monthly out of Zimbabwe by the Zanu PF cabal. The big question is where all the remitted monies goes as teachers and nurses get a meagre £35 a month to live on. This is an extremely sad situation.

His wife and sons have a cosy relationship with a well-known criminal and drug dealer Delish Nguwaya who they have often travelled with to China on shopping sprees. He was awarded a tender to supply COVID 19 goods through the then health minister Obadiah Moyo worth about 60 million dollars which were way above market prices and no due process was done for those tenders as Mrs Mnangagwa appointed herself health ambassador. This indicates the rot at the core of Mnangagwa and those closest to him.

Recently his close acquaintance and long-time friend from midlands Kuda Tagwirei has come under the spotlight for criminal financial activity. The British foreign minister Mr Dominic Rudd has even put him under sanctions. His misdemeanours have been adequately documented and have been shared widely in media. He gets government tenders and is famous for over pricing and prejudicing the government system. These range from hospital supplies, buses, and fuel. His business partner the deputy youth minister of Zimbabwe was under the spotlight a couple of weeks ago for splashing 770 000 USD on a rolls Royce airlifted to Zimbabwe for his pleasure while the Zimbabwean youth continue to suffer unemployed, uneducated, and unable to access basic medical treatment.

The history of Mr Mnangagwa’s corrupt tendencies date back years. However, these are a few very recent ones.

Since the ascension of Emmerson Mnangagwa to power there has been an increase in the persecution of human right activists, journalists, political activists and one who speaks out against Zanu PF.  Political activists like Jestina Mukoko, Joana Mamombe and Cecilia Zimburu, Dr Mangombeya were all abducted, tortured, beaten, and made to eat their own urine and harassed before being dumped in Harare. They have continued to suffer being put through courts and being harassed by the Mnangagwa regime all in a bid to get people to conform to Zanu PF beliefs, practises, and propaganda.

Political activists like Hopewll Chinono, Tafadzwa Ngadzore and Makomborero Haruvashe were some of the highlights of the terror of the Mnangagwa reign and these terror acts continue unabated as the Zanu PF propaganda machine is bracing up for the 2023 elections where they continue their bid to remain in power.

There have been many disappearances of people like Itai Dzamara who have never been accounted for. He disappeared on 9 March 2015. Professor Jonathan Moyo a former Zanu PF cabinet minister and spin doctor has suggested that Emmerson Mnangagwa knows what happened to Itai Dzamara.

Disappearances through the Zanu PF machinery started as early as October 15, 1975, and below a brief history found on the internet. This is just a fraction of the many accusations that are targeted at Zanu PF over the years.

Some of the arrests and abductions after 2019 are described above. Under the current leadership of Emmerson Mnangagwa, it appears these persecutions, abductions and torture of political opponents have gained momentum.