Zanu PF Zimbabwe - At War with its People 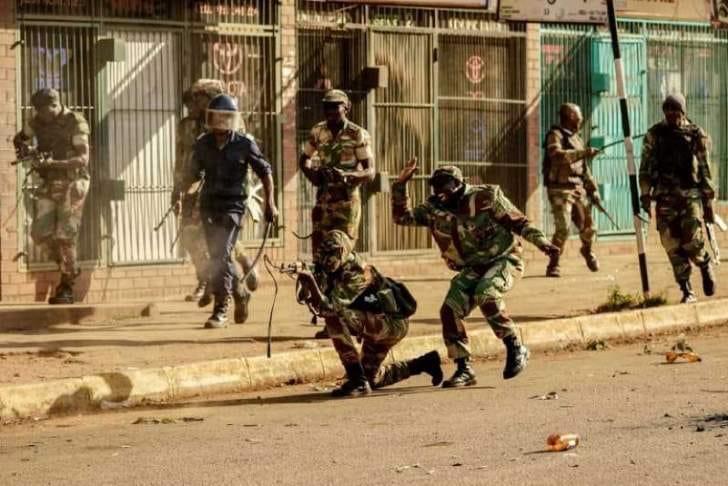 According to Hans Speier (1946) war is a social conflict that is not differentiated by causes but rather by the social definition of the enemy. The enemy of Zanu PF is simply the people of Zimbabwe. There are 3 types of war. These include absolute war, instrumental war and agonistic fighting. At this point we will discuss what absolute war is and how Zanu PF has conducted an absolute war against the people of Zimbabwe over the past 41 years.

Absolute war is unrestricted and unregulated violence, treachery and frightfulness and there is no sense of obligation. Since its inception in 1980 Zanu PF has unleashed violence on the citizens beginning with the infamous Gukurahundi of the 1980s, through its religiously violent election cycles of 2003, 2008, 2013 and 2018 they continue to unleash violence. Of course, in 2018 there was an anticipation in change of conduct with regards to violence but Mnangagwa’s ascension to power offered no end to violence. This violent nature in Zanu PF has created fear in the citizens and has put the citizens in a loosing position.

Zanu PF regards the general population as the ‘Enemy’

When push comes to shove Zanu PF will not hesitate to use terror and force against its citizens. Since 2003 all its elections have been marred with violence against its people and its citizens. Many families have lost mothers, fathers, and children at the hands of Zanu PF violence. A peaceful demonstration will end up having deaths. This was done to intimidate the ‘enemy’ - never to speak out. Speaking out as an activist will get one persecuted through violence, arbitrary arrests, torture, and various forms of persecution. People like Itai Dzamara have lost their lives because they dared to challenge the Zanu PF cabal.

Zanu PF has dealt a blow to the psyche of many Zimbabweans creating a sense of fear of the ruling party and those that represent it, who include the army, police, green bombers, some clergy, and those believed to be connected to Zanu PF. This is of course a story of treachery as Zanu PF has betrayed the trust of people who entrusted their independence from colonial rule to them since 1980.

In absolute war the enemy [the people] will be an obstacle to the attainment of the valuables they want to control therefore they should be annihilated. The enemy is a danger to the ‘community’ as a whole and their existence disturbs the how the ‘community’ understands and experience life.

Zimbabwe belongs to Zimbabweans and not to a select few politicians. The mineral resources, the wealth, the government, the land, institutions, and all infrastructure. However, Zanu PF has captured all mineral resources with minerals being smuggled out and the Zimbabwe miners’ Federation has been captured, purportedly by the Mnangagwa family.

Many of the proceeds of these mineral escapades never reach the ordinary person in Zimbabwe. The benefits are for the select few who buy state of the art cars and houses while hospitals go without equipment and medicines. Teachers, nurses, and other civil service remain unpaid or receiving a meagre £35 a month. Mr Tendai Biti stated that 100 million USD worth of minerals is smuggled out of the country every month and yet salaries are pegged at £35.00 a month.

Of course, this is to annihilate the ‘enemy’ which is the workers and other ordinary Zimbabwean. The livelihood, existence of the ordinary citizens should be destroyed for the Zanu PF community elite to be kept in power and Zanu PF is not taking the risk of having free citizens. Citizens are not allowed to think or choose for themselves even in an election. Zimbabwe is a thriving dictatorship which is under Zanu PF and Emmerson Mnangagwa.

Land resources are strictly distributed along political party lines, neatly alienating and cutting out the ordinary citizens from acquiring free state land to farm. Many white farmers had their land taken without compensation. Those who swore allegiance to Zanu PF had villagers removed from land owned by their family for generations and it was given to them. This is simply rogue behaviour by Zanu PF. In all its history it has never compensated anyone for the land taken away from them meaning land is owned by Zanu PF and can be given to anyone they think is deserving for supporting their cause.

The enemy is considered as barbarians, savages and infidels and the war is ferocious because of feelings of horror and disgust. The above description narrates Zanu PF’s attitude to the people of Zimbabwe since taking to power. The corrupt Zanu PF cabal will do anything to stay in power and they have simply declared war on the people of Zimbabwe who have the power to take them out of power. They must stay in power to continue to milk the resources of Zimbabwe without any restrictions checks or balances.

They have treacherously cut all supplies of resources to their enemy which is one of the major strategies of war. Their “enemy” [the people] cannot access good medical treatment, education, food, information, and necessities. Good medical treatment has now been reserved for the ‘elite’ of the Zanu PF cabal who can afford private treatment. When the rogue regime members get sick, they are simply flown to China and South Africa for treatment while the hospitals being used by the ordinary person (the enemy) barely have even paracetamol.

In government hospitals only 1 in 8 babies born each day survives. Cutting off health care is a violent way to kill your enemy. The strategy against the people through the health sector is not only the poor health services, but it is also by frustrating the professionals that offer the health service by not paying them enough. Of course, babies dying like this is simply robbing Zimbabweans of their future, in turn consolidating Zanu PF elites’ as they can access state of the art medical treatment.

This is a means of having the enemy [the people] not to speak, voice their concerns or to offer an alternative opinion to theirs. The state media has been monopolised by the Zanu PF establishment therefore the enemy has got no alternative source of information.

Supplies of basic commodities are out of the reach of ordinary Zimbabweans who are an enemy to the cabal. A teacher and a nurse earn a meagre £35 a month but an average family needs £400 a month to eat and live a very basic life. These are Zanu PF strategies to disempower the enemy [the people] so that they will not be able to wage a war against them.

The enemy [the people] have the potential to stop the Zanu PF in community from accessing the wealth of the country that they are accessing through corrupt means. A good governing system will stop them from accessing minerals and other government structures they use to enrich and keep themselves in power.

Zanu PF has a strong propaganda structure which includes the clergy as it has been known to pay pastors and preachers thousands of dollars to do their bidding and propaganda by attempting to brain-wash their followers into believing that Zanu PF corrupt cabals are ‘God ordained’.

The Zanu PF cabal is simply at war with the citizens of Zimbabwe for the control of the nation. Zanu PF has used rogue, clandestine and renegade ways to stay in power which do not regard the welfare of the ordinary citizens. Zimbabweans are under the claws of a rogue and renegade regime.